After several attempts and some issues, our www.egabrandywine.org is working again and will bring you here.
:)
Denise
Posted by Brandywine Chapter EGA

Stitch in Public at Winterthur! 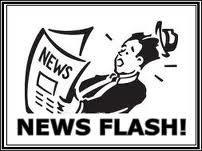 NEWS FLASH!:  Judy Herdeg has arranged for our EGA Brandywine Chapter to stitch in public on Tuesday, April 23 from 10 a.m. to 4 p.m. at Winterthur in the New Reception Gallery, where our 30th Anniversary Exhibit was held.

As I'm sure you all remember, each EGA Chapter is asked to stitch in public at least once during the year.  This is a wonderful way to introduce anyone who comes to Winterthur that day to what we do.

Judy has established three shifts of stitchers:  10 a.m. to noon; noon to 2 p.m.; and 2 to 4 p.m.   Please email Judy at (jcherdeg at verizon dot net) to sign up for a shift.  Judy will then contact us later with all the details. 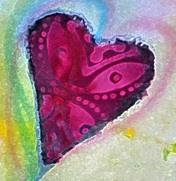 Our newsletter is available!  Please contact us if you need a copy.

The "Calendar" tab above has been updated with the latest guild activities/dates. 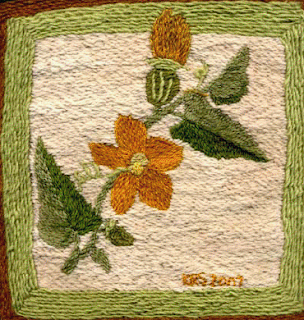 At the January meeting, I shared the Colcha Embroidery Study Box which is a collection of articles
organized by the Sandia Mountains Chapter of The Embroiderers’ Guild of America. Colcha Embroidery
is a Spanish-Colonial wool embroidery of New Mexico.

The traditional embroidery is of hand-spun wool stitched on hand-woven, plain weave wool using a self-couching stitch. The designs were mainly of flowers and geometric designs until the Mid 19 th century. Usually the entire background, as well as the motifs, was covered with stitching. Colcha means bedspread in Spanish and the embroideries were used as bedcovers, altar cloths and table runners. This couching stitch is used in crewel embroidery and in eastern Europe silk embroidery. It may be that the Moors brought this stitch to Spain and thus it was brought to Mexico and on to New Mexico. The colcha stitch was only used in Northern New Mexican and Southern Colorado settlements in the 1700’s.

About 1850, New Mexico opened up to traders from the States who sold ready-made wool blankets and cotton twill. A new style, where only the motifs were stitched, became popular. Until the 1930’s, old cochas were identified by the fact that the whole background was stitched. However, during the Depression, some textile restorers north of Taos started recreating old-style colchas using wool yarn unraveled from old blankets for the embroidery and backing patched from old handwoven sabanillas (mattress covers). These embroiderers introduced new subject matter of cowboys and Indians, wagons and Santos (saints) and the embroideries were used more as wall hangings than blankets. They also embroidered the background in regular rows rather than in the meandering rows of the traditional colchas.


These restyled colchas were very saleable, and inspired a number of revivals throughout the 1900’s into the 21st Century. From its founding in 1974, the Sandia Mountains Chapter researched the old colcha patterns and taught the colcha stitch in workshops. Today, there are a number of colcha embroidery clubs throughout New Mexico, many new books delving into the history of colchas, and competitions, some of which require that the wool be hand-spun, hand-dyed and hand-woven as well as stitched in traditional patterns.

The illustrations below show the basic stitch and its relation to Bokhara stitch. Today, colcha embroidery is done on wool flannel, linen, cotton twill or monk’s cloth using hand-spun wool, strands of crewel yarn or tapestry yarn. However, string, acrylic yarn, and burlap have also been employed when supplies were scarce or a certain color preferred.